In the past, fans were just fans. No one expected them to do anything more than blow the fresh air breeze. But with technology development, good old fans also got an upgrade, and now we have the option of an ionizing fan. But what does ion mean on a fan?

Ionizer fans are sort of air purifiers, and apart from blowing a powerful breeze, they also freshen up the air by cleaning airborne pollutants like dust, pollen, mold, et cetera.

Do you have an ion button option on your fan but are you wondering what it means? Or are you thinking of investing in an ion fan? Then this guide is for you!

What Does Ion Mean On A Fan?

If you have a built-in ionizer in the fan, this means your fan has fresh air ionizer technology. Your fan will emit negative ions that attract positive ions already present in the air by pressing the button.

Both negative and positive ions work in collaboration to get rid of indoor air pollution, leaving you with fresh and clean air. With an Ion fan, you can enjoy a cool breeze and inhale toxic-free air that is vital for your health.

How Does An Air Ionizer Work?

Let’s get down to the bottom of this, shall we? What exactly is an ionizer?

An ion is a charged particle that is either negative or positive. Air ionizers rely on electricity to generate negative ions, after which they are dispersed in the air.

There, they join already present positive air molecules like dust mites, pollen, mold, bacteria, etc. When these particles get connected, the airborne particles get heavier and thus cannot freely float in the air.

As a result, these heavier particles fall down on the floor or the other surrounding surfaces like your sofa, bed, carpet, tv, etc. Once they settle on the surface, it is easy to sweep or vacuum them away, leaving the air at your home garden-fresh.

Related article: How Long Does Pet Dander Stay In A House

Imagine having a simple fan work as an air purifier. It is possible if your fan comes with a built-in Ionizer. For some people, it’s too good to be true, and naturally, they are skeptical about buying them.

No one wants to waste their money on useless things that add no value to their life, and who can blame them?

So the question here is: do fan ionizers really clean the air?

Well, it all depends on the quality of the ionizer the fan has. And even the research supports this theory. Some studies show that ionizers work effectively to clean air, while others show different results.

So what then should be done? Are ionizer air purifiers worth the investment?

And here is the simple answer:

If you live in a dusty area and have breathing troubles or allergies, you should consider buying a fan with a negative ion generator. If your ionizer is robust enough, it can get rid of contaminants in the air which can help you breathe better and sleep peacefully.

Are Fans With Ionizers Safe?

The motive behind investing in ionized air purifiers is, of course, to create a safe environment in your home and to improve indoor air quality. In that regard, it’s natural to think whether fans with ionizers are safe?

In the past, people got pretty skeptical about ionic air purifiers because of the controversy surrounding them. Maybe you came across such statements and also got skeptical about whether to invest in an air ionizer or not?

Previously, people were concerned that negative ions generated by ionic purifiers were responsible for generating harmful ozone gas. They were confusing ionizers with ozone generators which are definitely more harmful.

However, some initial and low-quality models were indeed generating some level of ozone, which was why ionizer became a subject of controversy in the market.

But all that is a thing of the past now. The latest high-quality ionic purifiers available in the market are completely safe to use at home.

The ionizer that disperses negative ions in the air is not harmful to our health. Negative ions are natural particles that are already there in the air. Lighting, sun and waterfalls produce them all the time and they are no threat to human health.

The process used by ionizers to produce negative ions is also similar to the natural process. If negative ion levels are present in moderate amounts, they offer many health benefits.

They enhance the air quality, lift up your mood, relieve stress, and equip you with positive vibes, according to this study by WebMd.

Are Ionizing Fans Bad For You?

Ionizing fans are good for people who want to breathe a clean and cool breeze or for people who are suffering from allergies. Ionizer fans are cheap and pretty simple to set up. But here’s a thing: while they are purifying the air, they end up creating ionized air.

Clean air is something crucial for our health, but ionized air is not a natural thing. You always have to stay vigilant and keep a close eye on the condition of family members with breathing issues.

If you are using an ionized fan and witness side effects from it, quit using it immediately.

What Are Negative Ions?

Let’s learn a bit about negative ions and how they affect our surroundings. Even if you haven’t heard the term, you must have witnessed the phenomena of negative ions several times in your life. Negative ions are present in the air charged with electricity.

For example, when a storm is coming, you feel the static in the air. This is an example of positive charge ions. Once the storm has passed, the negative charge ions gather in the air, and the air feels more purified and pleasant than the pre-storm air. Negative ions can uplift your mood like that.

Other examples of negative ions include the plant development process, when water crashes ashore or in a waterfall, or when lightning strikes. That is the reason we often find ourselves happy and cheery when out in nature. It is largely due to the negative ions.

What Is The Difference Between Air Ionizer And Air Purifier?

Both air ionizers and air purifiers are meant to clean air pollutants. But then, what is the primary difference between them, you may wonder?

Both devices are indeed used to clean the air at your home, but an air purifier is typically the one with HEPA air filters. In contrast, an air ionizer or ionic air purifier comes with an ion button on them.

Air ionizers disperse negative ions in the air, which results in pollutants like mold, dust, and pollen getting heavier and starting falling on the floor or other surfaces like your sofa, curtains or on your table. You have to vacuum them up to get rid of them.

On the other hand, air purifiers have HEPA filters that suck in the air filter by trapping all the pollutants and releasing back clean and fresh air into the room it is placed in.

Moreover, an air purifier is usually equipped with a charcoal filter that helps eliminate all kinds of odors. Air ionizers, on the other hand, do not help with odor reduction.

Related article: Can You Wash A HEPA Filter

Conclusion On What Ion Means On A Fan

So now that you know all about how an air ionizer works and what ion means on a fan, we hope you can make an informed decision that is in the best interest of your and your family’s health.

To sum it up, the ionizer on a fan is a great way to create a hygienic atmosphere and get rid of dust particles in the air, while letting you enjoy the cool breeze at your home. This way you can relax and breathe in fresh air all day.

It is better to buy a fan after doing some research. It is highly recommended to buy a fan that comes without ozone generation features. But if you already have a fan with an ozone- generator fan, you need to observe the level of ozone, especially if you’re noticing any side effects.

It would be best if you also made it a routine to clean your fan often. When the ionizer is cleaning the air, the dust particles get stuck, affecting its performance.

In the end, it all comes down to your preference and how you want to use the technology to make your life healthier and easier. 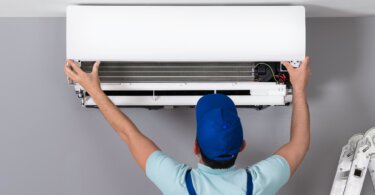 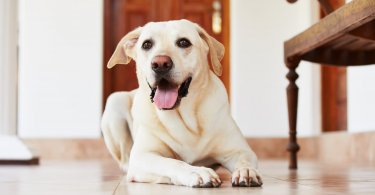 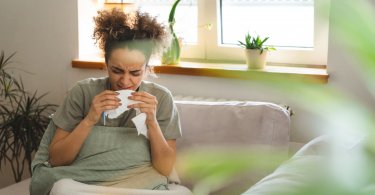